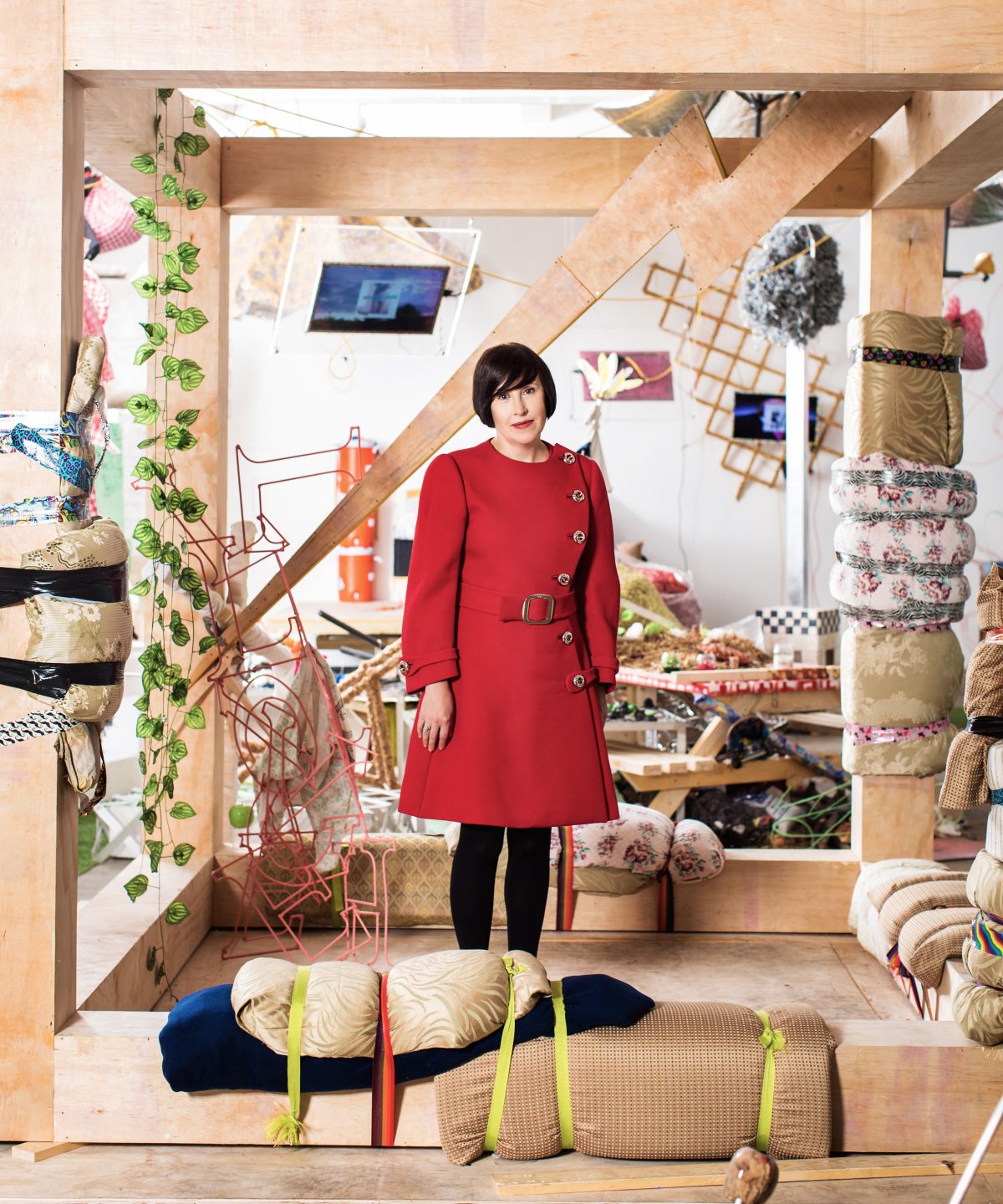 Alice Rawsthorn in the Ed Fornieles exhibition at Chisenhale Gallery, where she chairs the board of trustees.
Photography: Michael Leckie

Alice Rawsthorn is among the pioneer critics of design and through her publications, lectures and performances she has managed to change the attitude of state institutions and the global community toward the discipline. She writes for the international edition of the New York Times and the respected journal for contemporary art, Frieze.  She held a lecture on the role of design at the TED Conference and at the annual meeting of the World Economic Forum in Davos, Switzerland.

Alice Rawsthorn manages to explain how design touches all aspects of life. She is one of our professional role models and it is with great respect and admiration that we made an interview with her for the latest issue of Capital LIGHT.

Alice lives and works in London and was awarded the Order of the British Empire for her contribution to design and art. Her book Hello World: Where Design Meets Life is the book for how design impacts our lives. And keeping up with the times, Alice maintains a profile in Instagram, which features weekly topics spanning the spectrum of the discipline: design and death, Saul Bass, design and gardens, design and the refugee crisis, and Design Week Milan were the last five.

What was your experience from your volunteering at the Calais / Le Jungle refugee centre – what will be the one thing you would like to advocate in front of the international community? Can design influence policy making? Does design has a political role? And in what way? How would you describe the contribution design has on dealing with the refugee crisis?

Volunteering at La Jungle in Calais was an emotionally wrenching experience, which was heartbreakingly sad and profoundly shocking that people should be allowed to live in such inhumane conditions, but always interesting and, at times, hugely inspiring because of the courage and resilience of individual refugees and the people who are helping them. It was also heartening to see how the global design community has responded to the refugee crisis both by developing more constructive ways of tackling traditional challenges, such as designing cleaner, safer forms of shelter and by pioneering the application of new technologies, like the data visualization software, which has proved so effective in helping us to understand the complexities of an intensely perilous and volatile situation.

Yet design could make an even more meaningful contribution to the efforts to address the crisis, if it was part of a radical reconstruction of the global refugee system. Alexander Betts, director of the Refugee Studies Centre in Oxford, England, gave a brilliant talk about this at TED 2016. He suggests modernising the system by giving refugees the opportunities they need to be economically productive, including the right to work and freedom of movement; using data analysis to ensure that they are sent to places where their skills will be most useful; and issuing internationally recognized humanitarian visas, as Brazil has done. Those visas would enable refugees to pay, say, €200 to fly from Bodrum to Berlin, rather than €1,000 to a human trafficker. If those proposals were implemented, design could play a useful role in ensuring that the new system is robust, sensitive, constructive and sustainable.

Your lecture is titled “How do we need – and want – design to help?”. As many of our readers won’t be able to attend in person, could you please elaborate a bit on the theme? What are some of the ways we would like design to help?

Design has played many different roles at different times and in different contexts, but it has always had one elemental guise as an agent of change that can help us to adapt to changes in any area of our lives, and to try to ensure that they affect us for better, not worse. This means that the role of designers will be in a constant state of flux, especially in as turbulent a time as this one. I’m planning to discuss some of the critical changes that design can help us to deal with in the talk. Sadly, I’ll be spoilt for choice, as there are so many. Helping to reform the global refugee system. Arresting the deepening environmental crisis. Reducing the appalling economic imbalance between rich and poor. Finding useful applications for a torrent of ever more powerful technologies. Redesigning social services to make them fit for purpose. Enabling us to express the nuances of our increasingly fluid personal identities.

Design solves problems. Are there circumstances when design creates conflicts and in what manner do they affect the wellbeing of society?

As the US social designer Emily Pilloton put it, design at its best not only helps us to solve problems, but to do so “with grace and foresight.” But design isn’t always beneficial, it has the power to damage us. Just as good design can help us to live more efficiently, enjoyably, responsibly and fairly, bad design can be infuriating, disruptive, dispiriting and destructive. And design is a ubiquitous force that determines the quality of every aspect of our lives. We can’t ignore it. All we can do is try to ensure that design affects us positively, not negatively, by trying to understand it.

Creative minds and creative solutions are born out of adversary circumstances (political instability, war and poor economic state) or the other way around – in peaceful and abundant times of progress? Which one of these situations has proven to play a bigger role on the development of design as a discipline?

As I said, design is an agent of change. Some of those changes stem from adversity, and others from progress. The challenge is to apply design so sensitively and intelligently so that we can turn even the most ominous changes to our advantage, as the pioneers of computer design did in the post-war period. Many early landmarks in computing came from technologies developed for military use during World War II. Look at how radically they have changed our lives since then, and at their promise for the future.

The perception of design has changed substantially over the last years. It is more human-centred and social and recognised as a beneficial tool for society than ever… What would you like to see tackled by design in the future? How do you envision the development of the role of the designer?

It has been great to see designers being entrusted with an ever more eclectic range of increasingly ambitious challenges. An example is the explosion of activity in social design, where designers collaborate with specialists from other disciplines to redesign social services, like caring for the elderly or helping the unemployed to return to work. Rather than simple designing websites or brochures, which explain the decisions taken by other people, as they did in the past, designers are increasingly part of the decision-making process. So they should be. But designers must earn the right to play these ambitious new roles, by becoming more sensitive and generous in their approach to collaboration, and ensuring that design culture is as diverse and dynamic as possible.

What is the most transformative conversation you have ever had with someone on the subject of design?

I’ve had so many fascinating conversations about design that I can’t single one out, but I attended a lecture that had a particularly powerful effect on me at the Architectural Association in London in 1980, just after I’d left university. It was part of a series of evening lectures called something like “The Psychology of the City” given by a guy I’d never heard of. He described how the physical structure of a city affects our psychological experience of being there, specifically how the concentric circles of the canals in Amsterdam create a conservative culture because you walk round and round only to end up in the same place. It made perfect sense, and has defined how I’ve viewed design ever since. The lecturer was the then-unknown Rem Koolhaas.

Would you say that you have favorite themes to write about on the subject of design? Please, elaborate.

The reason I chose to focus on design is that, as it changes constantly, forcing me to make new discoveries and reassess my thinking. I really enjoy that challenge. I also love the chance to enthuse other people about the work of inspiring figures in design history, who have been unfairly neglected, and analysing how design is responding to broader political and cultural issues that I find interesting and important, from the global issues like the refugee crisis, to personal ones, such as gender identity.

What is the greatest motivator in your work – the things that support you when you are frustrated, the ones that give you confidence you perform a meaningful and valuable work?

My primary motivation is that I believe in the importance of my chosen subject: that design is one of the most powerful tools at our disposal to improve our quality of life, but the misconceptions about it prevent us from making the most of it. Boringly, a secondary motivation is the constant struggle to get better. I’ve been very lucky and have had a fantastic career with lots of wonderful opportunities, but I still feel that I have to prove myself all over again from scratch whenever I start something new. I always hoped that feeling would diminish with age, but sadly it hasn’t.

You are a very sophisticated woman with a strong attitude to fashion. But if you had to wear a “uniform”, what would it look like?

Thank you, but I’d never wear a uniform. I think what you wear is such an important part of your personal identity, that I’d hate the idea of it being forced upon me.

What is something you are curious about to see and learn more about when in Bulgaria?

I’m really looking forward to coming to Bulgaria, because I haven’t been before. I am delighted to have the opportunity to learn more about Bulgarian design and architecture, and also your incredible artisanal heritage.